This is the obvious place to start a blog about a layout, actually building the structural layout. I’ll start there and back-fill the details.

Late in 2013 I returned to where I’m from, Baltimore. We bought a house just off the old North Central Railroad in what was an iron works village before, during, and after the Civil War. Some of the standing buildings date to 1840, mine is a newer with a finished basement. A key ingredient to modeling in the mid-Atlantic.

After a few years of painting and home improvement I had some time to start considering a layout. I liked The One Module Approach (TOMA) championed by Joe Fugate. I wanted to combine it with the David Burrow Domino Module concept and see where it led. My teenage experience made me doubtful of using a scaled plan and getting it all to layout smoothly and derailment free. I wanted to sketch some ideas, build some 2’x 4’ modules and layout it out full scale. I felt that would suit my style better as I wasn’t hand-laying track, despite my previous real world experience laying full size track.

I started with a sketch of a small space in the basement that wouldn’t interfere with the other functions of the space. I drew some schematics on graph paper to let me know what I might be able to include. 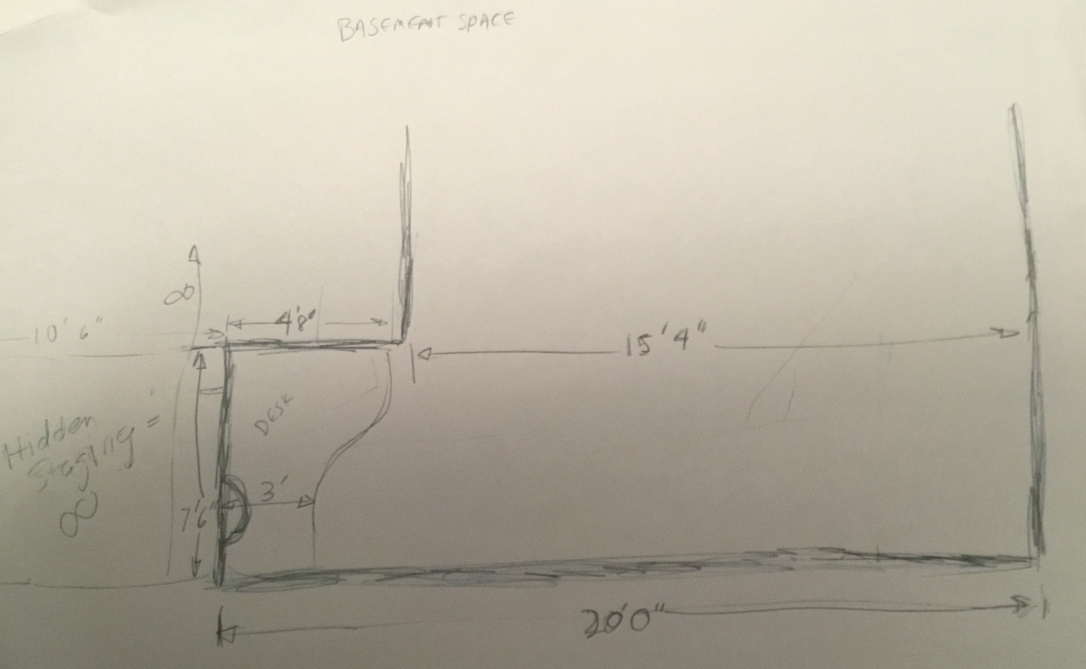 Twenty years ago I sketched out that dream layout starting at Camden Station in Baltimore. My dad’s office was there before it was a ballpark. Before I was old enough to drive, I would catch trains down to DC from Camden to look around at the museums and just to get away. It paid off long term, I took my wife there on our second date and she was a little impressed that I knew something about the museums and their contents.

The line from New York City under Baltimore’s Howard Street emerging and at Camden Station seemed like the perfect place to hide some staging. Good concept but I also spied another location on the Old Main Line to have a layout emerge from staging. Ilchester. The research on that location started about 15 years ago and I was going to put it to work on my new layout. It would the east end of my layout with a someday connection to staging in an unfinished space behind a wall separating the finished from unfinished basement.

That is my starting point so I set about building some modules, kept drawing sketches, and subscribed to Trainmaster.Tv for $5.99 and used my time on the treadmill in the morning to watch some great videos. Each day I found something new to catch me up after ten years of little to no modeling. I found a good airbrush and instructions on how to use it and keep it clean, inspiration from a B&O layout, and a detailed series on building a first layout. 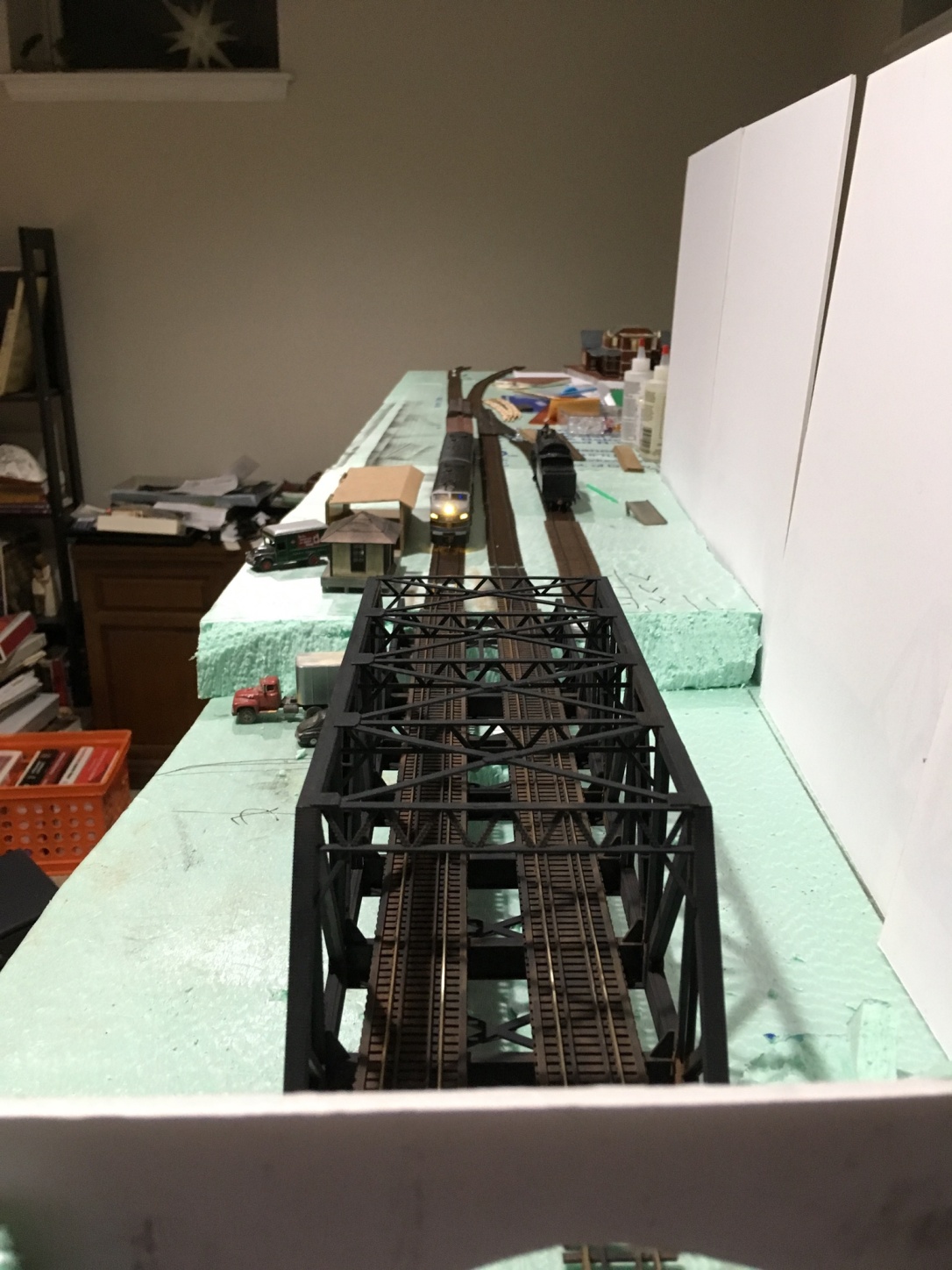 Previous experience, conversations with Don Barnes, and the TOMA building series taught me to lay a sound foundation. I started with a trip to Home Depot for a 4’x 8’ sheet of 1/2” birch clear plywood. I had it quartered into 2’x 4′ pieces at the store and it all fit in my Mini Cooper S. I made a cut sheet to maximize my lumber use and ripped a bunch of 3 3/4” wide strips as basic building blocks. It helped to have a table saw, though this could have been done at the lumber yard for a charge and cut shorter at home with a chopsaw to get the needed lengths.  I did some drilling with a hole saw to look like the commercial products and make wiring easier. I also borrowed from the commercial product designs and purchased a pocket screw jig to make easily changeable joints. I added screw-in feet for leveling. One photo below shows that I was able to build three 2’x 4′ modules from the initial $50 piece of plywood and I have pieces left over for risers. It is always recommended in the modeling press, home-building, and juxtaposing my teenage experience; start with a solid foundation. 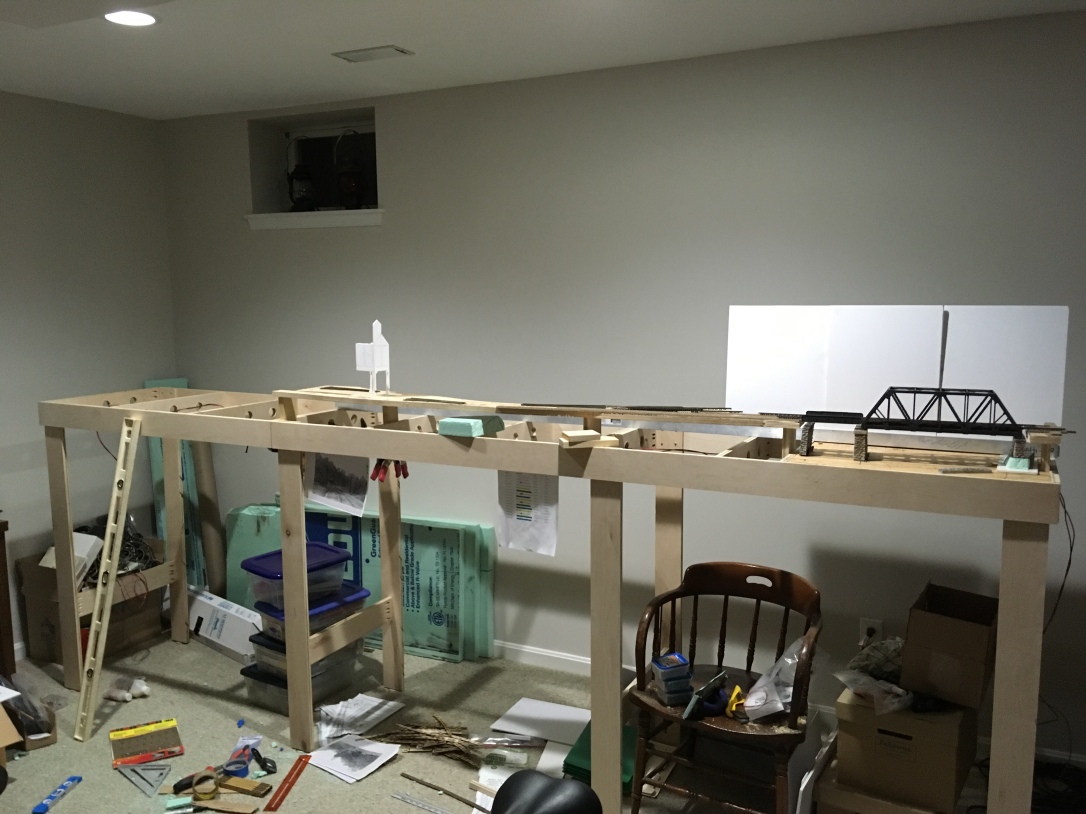 View all posts by bomodeling